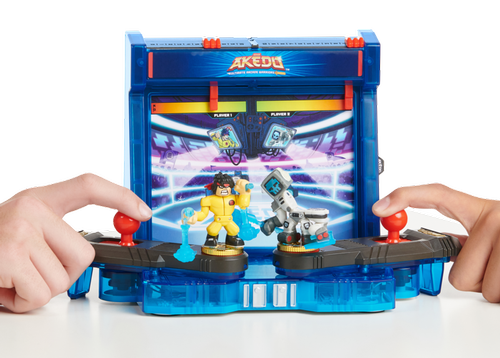 Two will enter, but only one will be victorious! Retailers, we have great news for your customers who are already learning about AKEDO Ultimate Arcade Warriors thanks to Nickelodeon hosting a highly advertised launch event this summer on their YouTube channel. This toy collection is the smashing result of a top-tier influencer and gamer partnership that is sure to be a legend in the making! Discover why this toy series is on everyone’s hot list this summer and how to pre-order these action figures for your store shelves to prepare for an influx of excited fans following this widely anticipated launch.

What is the Akedo Ultimate Arcade Warriors Series?
The ancient martial art form called “Akedo” is about to be the main focus of a new animated series on the Moose Toys YouTube channel and action figure toy collection that will simultaneously be launched this summer. In this action-packed series, two characters will use video game quality fight moves and real Akedo tournament rules to crush the competition and win the title of champion! Nickelodeon will launch the epic battle production on August 5th, and Nathan, the star of the YouTube hit “Unspeakable” has been named as the host. The bottom line - this is one launch party that is designed to take viewership and toy sales to a whole other level!

Why It is Expected to Be a Top-Seller
This series has it all - fighting video game characters, realistic martial arts moves, the classic Japanese anime cartoon style that has captured the interest of teens and tweens all over the globe, and, of course, extreme action figures that can add to the excitement at home. But, these portable toy character replicas have another big draw in that they are always ready to battle using actual fight moves as seen in video games, movies, and real-live tournaments. Such moves will also be mirroring those used in the animated Akedo Ultimate Arcade Warriors series. This means dads can battle kids for chore assignments around the house, siblings can battle over the rights to choose the family activity, and friends can claim bragging rights on the playground.

One thing is certain, this toy collection will not disappoint warrior fans who are looking for ways to continue the action when the screens are off. From real fight moves to super-fast reaction speeds, the main event in these battles is going to put each player’s skills to the test. Friends and family members will have to see if they have what it takes to receive the title of the ultimate champion.

Akedo Toys at License 2 Play
Want to get a sneak peek at the Akedo Ultimate Arcade Warriors action figure line-up? License 2 Play offers a chance for you to see what’s being offered on our safe and secure website. The series begins with a Starter Pack assortment of three characters, one joystick controller, one training tool, and one set of Akedo tournament rules to get each fighter in shape to take on the next opponent. Once the fighters are ready for battle, it’s time to add more players with nine different Akedo Fight Pack assortments. Each pack contains at least three of the main animated series characters plus one hidden character that will be revealed when the box is opened.

During the tournament, the warrior coaches can keep score with the trigger controllers found in either the Akedo single pack and the Akedo Versus pack assortments. These portable controllers and characters are the perfect size for taking the battle on the road or taking center stage in the middle of the dining room table. However, when only the full experience will do, the Akedo Battle Arena will add the background images, sounds, and exclusive characters that provide a more realistic experience for both the warrior trainers and spectators alike!

How to Pre-Order Akedo Toys for Your Store
Ready to place your order for the wholesale Akedo Ultimate Arcade Warriors series? Simply fill out the License 2 Play registration form on our safe and secure website and send us a copy of your Sale Tax Resale Certificate. It’s that easy! After approval, you can use our user-friendly product menu or search tool to locate the items you want to order. But, don’t wait! After the series launches on August 5th, your customers will be searching for which stores carry them in stock and ready for fast purchasing. Be prepared by pre-ordering your wholesale inventory today!