Fans of the Classics will Love these Mego Collector Action Figures 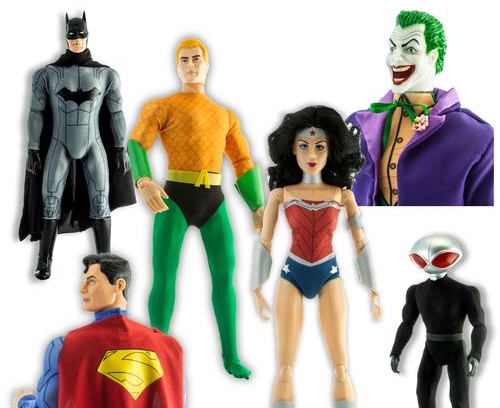 Imagination play toys or collector's items, these Mego character figures with 14 point articulation will make for a quick sell for all your classic movie fans. From heroes to villains and musicians, there are 24 characters to mix and match, including the guys from the trending "Impractical Jokers" show. Expect conversations to spark as consumers see this group of archetypal and modern-day legends.

DC Comic Action Figures
Straight from the pages of the popular DC comics, these poseable figures are ready for battle! Wonder Woman, Superman, Batman, and Aquaman represent the brave heroes of the collection while two of the most mischievous evil masterminds, the Joker and Manta, keep the heroes busy protecting Earth. Be prepared for buyers of these figures to want them all!

Horror Film Action Figures
People go to the movies to laugh or cry. But, some people are looking for a good scare! For the later group, we offer an impressive line-up of horror film villains. Frankenstein, Freddy Krueger, the Invisible Man, Wolfman, Dracula, and Nosfertu are action figure characters that will haunt the playtime dreams of all your horror-film devotees. While the new movies may contain more realistic special effects, the villains in this group are still arguably the reigning champs of the industry.

SCIFI Action Figures
Your favorite Star Trek characters are back! They searched the universe for signs of life on planets never explored by humans before in an effort to "boldly go where no man has gone before". Now, your customers can be a part of the story with their own collector's pack containing the popular Spock, Kirk, Uhura and Romulan action figures.

Impractical Joker Action Figures
These four figures resemble the stars of the hit comedy series called "Impractical Jokers". There is nothing these guys won't do for a laugh, and your customers will get a real kick out of seeing them in miniature eight-inch size on your shelf. Each figure comes dressed to mimic the stars' comic personalities. Display all four, and watch your customers giggle as they recall their favorite improv situations from the show.

Musician Action Figures
For music enthusiasts, we offer action figures that will bring back memories of how rock and roll became what it is today. Figures available for purchase include Jimi Hendrix who was perhaps best known for his unique style of guitar playing, the four members of the KISS band who will always be famed for their next level stage performances where the guitar would smoke and drums would lift off the stage, and the king of Rock and Roll, Elvis Presley. These collectibles make great gifts for current and future musicians or music fans who never want to forget how it all started.

Bruce Lee - Need We Say More?
Martial arts classes have popped up everywhere in recent years, and modern movies make fighting with martial arts look super cool. But, when it comes to looking awesome on the big screen, it's hard to beat the king of Kung Fu, Bruce Lee. He is the man who introduced the art of Kung Fu to the world by starring in five hit movies, and his name is the most recognized in the martial arts industry. We love our DC comic characters too, but the fact that his was a real guy performing amazing stunts may make this action figure that comes with its own set of nunchucks sell out quickly!

If your customers are movie buffs or love the classics, you will need more shelf room to display all of these action figure sets that you can expect to sell both in groups or individually. Parents will have a great time reminiscing about the original Star Trek, horror film and DC Comic characters. Kids will laugh along with their parents at the Impractical Jokers. With so many choices, everyone is bound to find a favorite!